Wisconsin pulled the upset of Kentucky, which makes the final of the 2015 NCAA Tournament an interesting match-up between two very evenly matched teams. Throughout the tournament, all predictions indicated that Wisconsin was (a very distant) second behind Kentucky with respect to probabilities of winning the tournament.

Based on the latest (and final) model predictions, Wisconsin is a slight favorite over Duke in a game that is essentially a toss-up:

Although the Bradley-Terry model was accurate at picking the winner for only 71.2% of the games, a deeper analysis shows that the model predictions were well calibrated but that the model itself lacked the prediction power to be more informative. In the figure below, the X-axis represents the model-predicted probability a team would win and the Y-axis represents the expected true proportion of wins for any given probability. The solid red line is the model the dashed black line is where a perfectly calibrated model would fall. 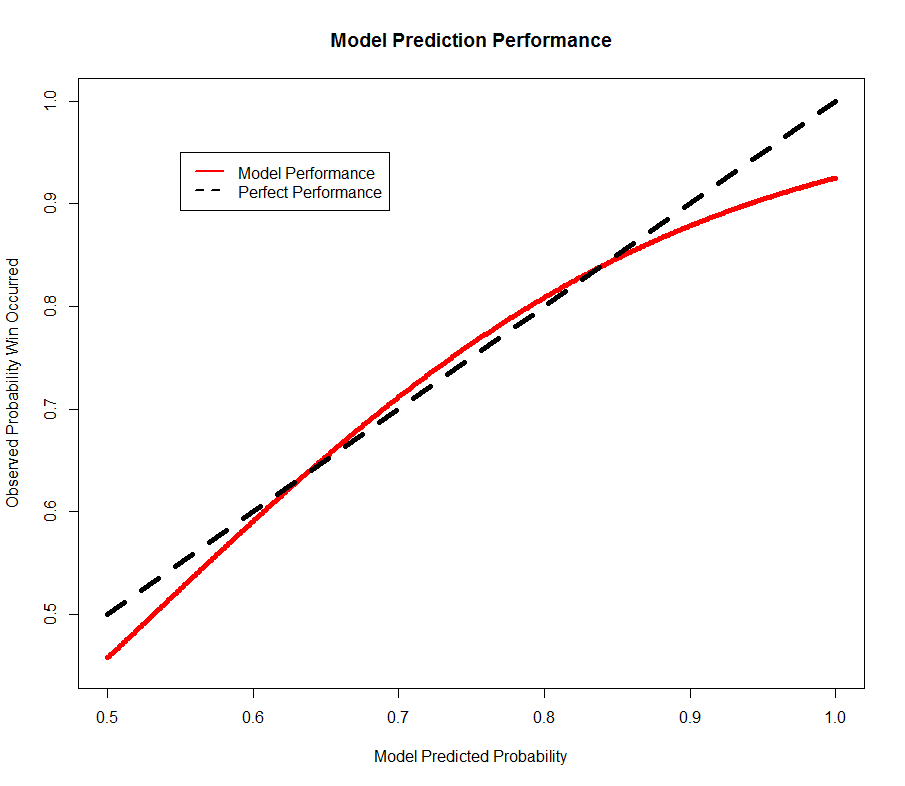 What does that mean for the final game (with a model-predicted probability of winning of .53)? Based on the curve in the graph, the result is likely closer to a 50-50 game.

Wisconsin pulled the upset of Kentucky, which makes the final of the 2015 NCAA Tournament an interesting match-up between two […]

The 2015 NCAA Tournament is down to the final four teams. The biggest surprise is Michigan State, who started the […]

The final eight teams are set in the NCAA Tournament. From the updated model results (method described in this previous […]

Although KU’s loss yesterday means basketball exist to many here in Lawrence, Kansas, there still is a tournament going on […]

2015 NCAA Tournament Predictions: Round of 32 Update

The play-in games and the first round of the NCAA tournament featured a number of upsets. The Bradley-Terry model predictions from my previous […]

NCAA tournament predictions are pretty common these days, from FiveThirtyEight.com to Bing.com. Not to be left out of the fun, here are […]